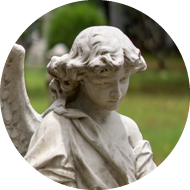 Museum Taman Prasasti (Indonesian for Museum of Memorial Stone Park or Inscription Museum[1]) is a museum located in Jakarta, Indonesia. The museum was formerly a cemetery, built by the Dutch colonial government in 1795 as a final resting place for noble Dutchmen. Several important person that was buried in the cemetery area are Olivia Mariamne Raffles – the first wife of British governor general Thomas Stamford Raffles - and Indonesian youth activist Soe Hok Gie

The cemetery was officially opened on September 28, 1797, although people had been buried here as early as 1795. The cemetery was known as Kebon Jahe Kober (recorded under this name since December 14, 1798). It was located in Kerkhoflaan and has a total area of 5.9 ha. The cemetery was built to accommodate the increasing number of death that was caused by an outbreak of disease in Batavia. Because of this outbreak, the cemetery area of the New Dutch Church (Dutch Nieuwe Hollandsche Kerk, now the Wayang Museum), Binnenkerk (an inner city Portuguese Church), and Sion Church (an outer city Portuguese Church) was full. Because of this, some of the gravestones from these cemeteries were transferred into Keboh Jahe Kober cemetery.[2